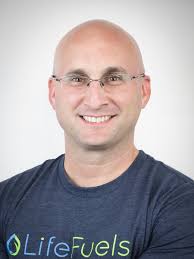 Hello, I’m Jonathon Perrelli, CEO and Founder of LifeFuels based in Reston, Virginia.

My career has been quite rewarding as five of the seven startups I founded have been acquired. LifeFuels is startup #7 and our work on the world's first portable beverage making platform led me to gain the title of Inventor, of U.S. Patent #9932217.

The Consumer Technology Association (CTA), featured LifeFuels in i3 Magazine on July 30, 2018 where I was interviewed discussing our experience at the 2018 Consumer Electronics Show (aka 'CES'). The CTA and CES have played a critical role in the development of LifeFuels since we were the recipients of an Innovation Award in 2016 for the original prototype of our bottle, FuelPods, and app. LifeFuels also received the coveted CES Innovation Award in Fitness, Sports and Biotech again in January of 2018.

For those interested in attending or exhibiting at CES, I published ' 10 Tips for a Successful CES' which is a 3-4 minute read. On October 4, 2018 the CTA published a Case Study about LifeFuels and our relationship with Keurig Dr. Pepper.

Prior to LifeFuels, I co-created and produced a documentary film called Startupland in partnership with filmmaker Justin Gutwein. Startupland featured five startup founding teams linked here and the film and our online curriculum for Startupland are available for the world to learn the process of startuping up. The documentary film was featured in over 75 countries thanks to our partnerships with The United Nations Foundation, Startup America, and several other organizations.

The film was set at The Fort, an accelerator in D.C. that was part of the venture fund I founded called Fortify Ventures. I'm quite fortunate to be able to actively support two incredible organizations; The Virginia Tech Center for Entrepreneurship, and The Vinetta Project which was created to support female entrepreneurs.